How To Build A Profitable Team Without Constantly Replacing People 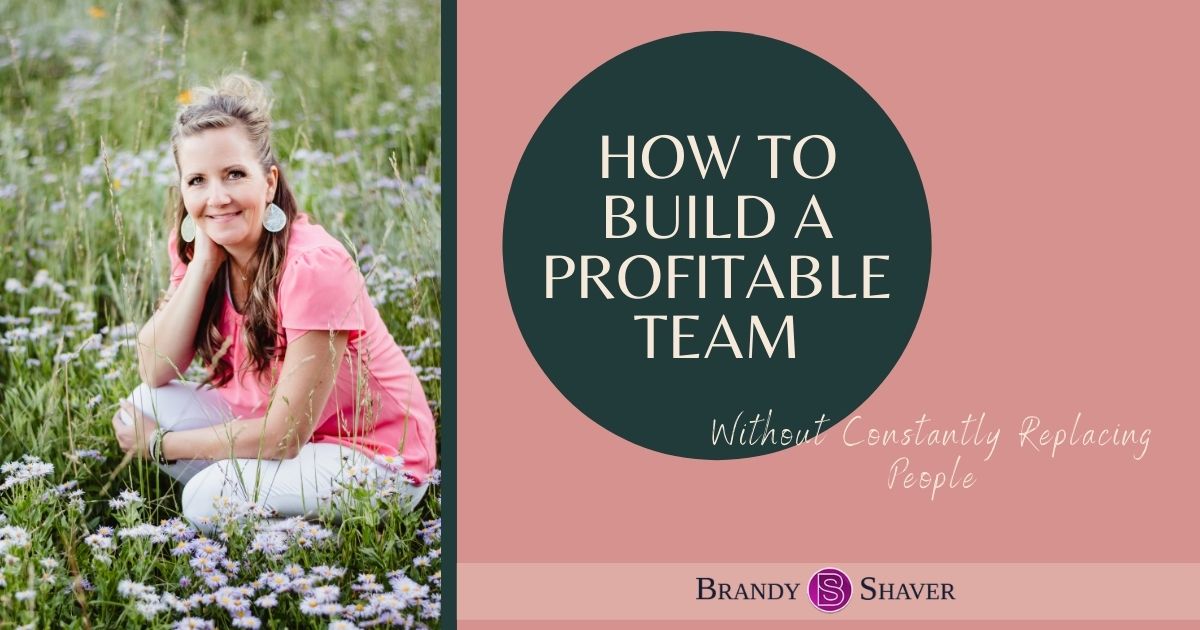 How To Build A Profitable Team Without Constantly Replacing People

Welcome to today's video. My name is Brandy Shaver, and we are talking about 'How to build a profitable team without constantly replacing your people'.

So for those of us that are meeting for the first time, like I said, my name is Brandy Shaver, and I help people build their businesses online by teaching you some branding techniques, how to use social media to grow your business and to build a team.

So we're going to do this backwards today. There's actually three tips I want to share with you, but I'm going to start with the least important, from number three, all the way to number one, just to kind of change it up.

I'm excited that you are here, excited to share this with you on 'How to build a profitable team without constantly replacing your people' because let's face it, network marketers, business people, entrepreneurs, they sometimes get inside of building a business and they're like, "Oh, this is way too hard".

And they're not making any moolah right off, and so they quit, right!

So how can we continue to build with the same people and continue to keep those great people inside of our teams?

Because it's not always about what you are doing and who you are enrolling, right? It's about what they're doing.

Which brings us to tip number three, which is LEAD BY EXAMPLE.

Now this is a simple but powerful concept. Because, I know I'm totally guilty of it too and drop me a comment if you are as well, that when at some point in your business, maybe you've enrolled somebody and you're like, "Okay, I did it, I got him in, now it's time to go into management mode".

And here's my other business over here. And I've only got one person in my team and all my focus just went to Fran. Lead by example!

Now, if I want Fran to actually build a team, guess what I have to be doing? Now that doesn't mean you just enroll her and leave her there to figure it out.

You're going to want to plug her into your stuff, into your system, into what you know is working on how to do things, but whatever you want your team to do, you will need to be doing yourself. Okay.

That is the key here. The speed of the leader is actually half the speed of the team. I'm just going to say it like it is. I know a lot of you are like, "Oh my gosh, what did she just say?"

I just said, the speed of the leader, the team is going to do half of that. That's just the reality of how this works building teams.

So you've gotta be doing it yourself. Now, here's another thing. A lot of people that we get into entrepreneurship and maybe we haven't seen a ton of success, right? Maybe we're just starting out.

Maybe we're, you know, we've just got a little bit of success or maybe we're brand new. And one of the things that I find that people do is they sit back and, for instance, let's say I enrolled Fran and I was brand new to my business.

I kind of probably when I was brand new, I would sit back and let my upline, or the actual company do most of the work.

She enrolled with me and so who do you expect that Fran is going to see needs to lead her? It's going to be me.

And it doesn't mean you have to be someone you're not. It just means that you are going to have to figure it out before you help Fran figure it out. Okay.

So lead by example and make sure that you are stepping into your own amazing self. Okay.

It's winter, everybody's sleeping. I get it. They're going to do what you do. And here's the thing. If you've got a dead team, YOU are going to need to go enrol a new team.

That doesn't mean you abandon them. That means you're going to wait until they're ready. If they wanna sit, go ahead and let them sit. If they want to walk, walk with the walkers, if they want to run, run with the runners, okay?

Now stay in touch with your personal recruits. And this all goes inside of lead by example.

We're not just in business to build a business, right? We are in business with these people because we want to work with them forever.

Stay in touch with those personal recruits. It's important.

2. Work With The People That Want It!

Okay, tip number two is work with the people that want it, no matter where they are in your team.

A lot of people in this business, in entrepreneur, in building teams, they fall into this mistake and they only work with their personal people.

Here's the thing. Your personal people might not actually be the ones that are going to build a team underneath you.

And like I said, walk with the walkers, run with the runners, but do not sit with the sitters. Those sitters, if they're not ready, that's okay. You love them. You love them where they are because I want to make this industry not a performance based acceptance.

I want to make it where everyone is accepted. If somebody wants to just make a couple hundred dollars a month, that's awesome. Right? That's great.

Nurture that relationship. Be with those people where they are, but you've got to run with the runners when they're ready to run.

And it doesn't matter where they are inside of your organization. It's usually three people down in line and you know what? That is actually a great example because that is pretty much the truth.

I wouldn't say a hundred percent, but I would say they're usually three or four levels below you. Some of your best people within your organization are not going to be your personal recruits.

They're going to introduce you to people that you would have never met otherwise. But if you build the relationship and you work with the ones that are ready to run right now, give them your attention and go for it. They're going to be able to build volume underneath you.

And here's my number one tip, is help your team succeed.

Now here's the thing. When someone joins your team, I get it, it's kind of exciting. Well, it's actually not exciting for me anymore because I've grown into a different person.

When Fran gets a cheque, I get excited because that means I'm doing my job. That means duplication is happening inside of the team. And what's even cooler, if Fran enrolled Alicia, let's say, or Billy, or maybe even Alicia enrolled Billy, Billy is getting results. Billy is enrolling people. Billy is making money, right?

That's when this gets super cool, because then you can see lives change, and you have had a huge impact in that. So it's really cool.

You've got to be putting this stuff into your calendar because if you're growing a huge team, sometimes people fall through the cracks.

So you want to set up some simple things, put in place maybe like, let's say I enrolled Fran and Fran enrolled Alicia and Alicia enrolled Billy.

Maybe I have Billy in my calendar and I just put his name in every other week or something just to check in with him, see how he's doing if he needs anything, okay.

Intentionally building your business. But you've got to be working with the team inside of the team. So help your team succeed, put promotions together, run challenges.

So do you guys have any questions? Let me know if you guys are getting value. Let's see.

Billy says: My problem was I wanted to do it all for them. And then they expected me to do everything. You got to teach them at the same time.

That is perfect Billy, you definitely do. You definitely have to pass that baton on or you're doing the job for yourself. Right?

You've got to definitely lead by example, but you've also got to let those people grow on their own and do some of it, right?

You know, you may have new recruits that come in to your team that are brand new. Maybe they don't know anything about entrepreneurship. Maybe they're going to take a little bit more time to simmer in that pot.

But if you build the relationship, keep with those people, help your team succeed on their level, meet them where they're at and help them grow. That's when things get really cool.

And also the last tip, this is like your bonus bonus tip is to always be that servant leader. But like Billy said, you've got to protect your time as well. Right?

Because you don't want to end up with another job where you're doing everything for everyone. So you've got to have some personal boundaries, personal time.

Make sure that you're taking care of yourself in the process and your family. Because if you do all of this and have a great team at the end of it, and then your family's like, you know what all you do is work. That's a problem, right?

So you want to set some personal boundaries as well!

All right, guys, if you got value let someone know if they need to know this information as well, smash that heart button if you got value and we will see you next time, appreciate you all. Brandy xx

7 Life Logics to Get You Winning in Life And Business