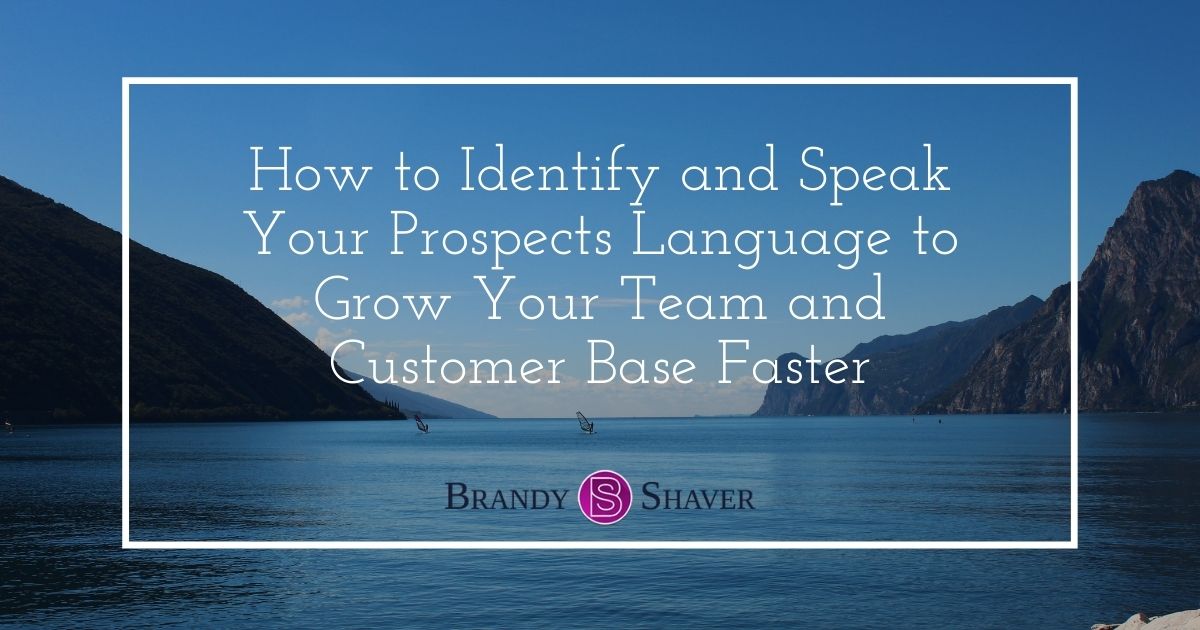 I am so excited to be able to bring this training to you. We are talking about How to identify and speak your prospect's language so that you can enroll more team members and grow your customer base.

So I recently just read a book. So it's called "How to talk to our network marketing prospects" by Keith & Tom 'Big Al' Schreitter.

So I have been practicing and I'm going to teach you what I kind of learned out of here and then you can go get the book to learn more!

I have learned how to identify and speak my prospect's language. #

What was happening to me is I would get on a call with one of my prospects, they were interested in joining my business or interested in being coming a customer. And I would go through all the hoops. Right?

Do all the things and then they would disappear and not enroll. Well, here's the thing. Each person has a color personality.

And if you haven't studied this at all, like I said, get the audible. It's a quick lesson and it's super simple. I'm going to give it to you now!

So YELLOW is they like to help other people, they love to help. So if you say to them, maybe you jump on a call and you're talking about your philanthropy.

If you're talking about the philanthropy of what your company does to help other people or helping women create an income online so that they can go buy more shoes or whatever it is they wanna have, yellows identify with helping people, serving others.

So they're helpers! If you want to think of a yellow, it's like a little grandma that is always bringing you cookies.

She was getting popcorn. She baked these incredible cookies. She'd made ice cream, all these things. She's very servant oriented. That's how you speak to a yellow.

If you are going to get on a call and talk to a yellow about the money, the cars, the trips, guess what? They don't care. And that's how you lose people. That's how I was losing people. Now that I'm aware of what I was doing, that's how I'm losing people. Right?

So RED, they are bossy!! They're very money oriented, this being number one, it's a big deal to them!

There are a couple other things, but think of red as bossy. I haven't decided if I'm red or yellow, I actually think I'm a mixture, but in the book they say you're either one or the other, and at my core, I love making money, but if I'm not serving other people, then I'm not happy and the money doesn't matter.

So I think I'm more yellow, but I'm pretty bossy. I say it like it is.

So reds, you're going to talk to them about the cars, the trips, the money. Being number one, we're the best team, the number one team or company, number one on the direct selling leaderboard, right?

And if you have a 'blue' ever present, they never get to the point because they're just talking. Non-stop! Blues talk and they like to have fun.

The comp plan broken down. They want the study that they did double placebo on, you know, like that's their jam.

And here's the thing, I've been practicing on these colors so I'm going to give you the same challenge that I was given.

So in your life, you have people that are around you like your spouse, maybe your kids, right or maybe some of your neighbors!

Start to try to identify what color they are. And most people have a mixture of some of these but one color or the other is going to be more dominant.

Now if you don't know the color personality of the person, because I have identified that I can probably get your color personality half of the time now, so if you have a well-rounded presentation that you share with other people, when you jump on a call that talks about the philanthropy, talks about 'We've got studies on our product, we're public traded, we're number one, our team is number one in the company, we're growing like wildfire, we're making tons of money, winning cars' you know, all those things and then talk about the fun and serving and helping other people.

If you can do a well-rounded presentation, you're going to catch all of them!

But if, let's say, I'm a red and you are a yellow and I'm talking to you about the money and the cars being number one and you're like, this isn't for me, it's just not my jam. Right!

Because you weren't talking that person's language! Okay.

So if you got value from today, let me know. If you need more on how to build your business, grab the link that's going to be inside this video. And I appreciate you being here. We'll see you on the next episode. Have a great rest of your day. Brandy xx

How to Attract Your Perfect Prospects to You So That You Can Grow Your Volume in Your Biz to Rank Advance.

How to Dial in Your DMO