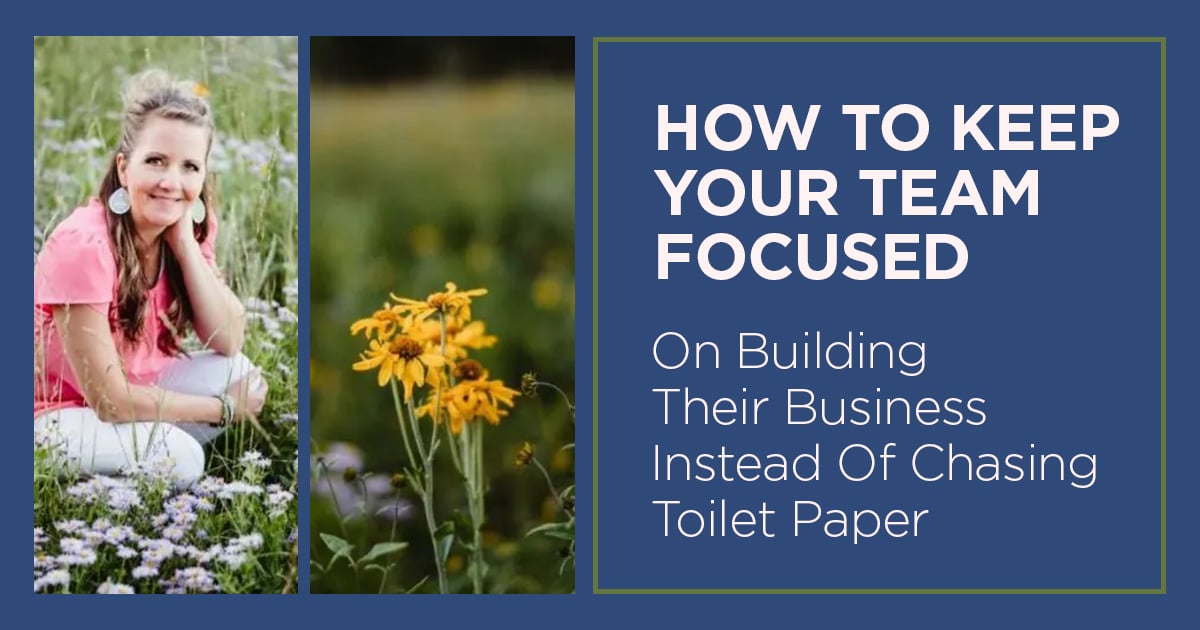 I want to share with you how to keep your team focused on building their business instead of chasing toilet paper.

​So in the current situation you might find that a lot of your team are preoccupied with what's going on.

And so we're going to talk about how you can definitely influence those people and keep them on track plus be a really great human being and be one of the people that they go to for support.

Because that's what building a team is all about, right?

​I'd love it if you'd comment on who you are, where are you are from ​in the comments down below. I'd love to come back in and have a conversation with you as well.

​For those of us that are meeting for the first time, my name is Brandy Shaver.

​What I do is teach business owners, entrepreneurs​ and people that build businesses online​ how to do that from their house with the pugs or in your pajamas, half pajamas, half dressed...any way you like!

​Here's the thing​...most of us that build businesses from home actually just became internet marketers because of the pandemic, right?

All of us were just forced to figure out how to build our business. So if you need tips on how to do that, grab the blueprint​ and it will walk you through the process of how to start to build influence online.

This is going to be how you build your business now. And like I said, 98% of us just were forced into this. If you haven't been building online​ now is a great time to learn how to do it.

So how to keep your team focused on building their businesses instead of chasing toilet paper​?

Number One  - Check In With Your Team

Check in with your team and let them know that you care about them​. ​Not just about them producing and their volume producing activities, ​but genuinely about them​, their families and their situation.

There's a lot of people that are a little bit stressed out right now and they've got kids home and they're now homeschooling.

There's a lot of stuff that's happening and ​just checking in and being a human is probably the best thing that you could do to connect with your team right now.

I know that's gonna take some time, right? You've got a billion other things to do...

Here's what I am implementing into my day. I try to talk to five team members a day.

Now this doesn't mean get on a zoom with them and have an hour chat, right? It means that you're going to check in with them, okay? So send them a quick messenger message.​

I like to use the voice message so they can hear your voice.

And then... if you know somebody who's really struggling​ get on a zoom with them and be a human. They want to connect with you.

That's how come they enrolled in your team the first time or when they did enroll into your team. They want to learn and grow from you​, so you building that relationship with them is super important.

Provide value to them on how to deal with their current situation.

Like I said, there's a lot of people that are displaced.​ ​People are trying to figure out homeschooling.

I'm telling you​, I've been searching for homeschooling tips for the last two weeks because it's been hard. I'm used to having my time to myself to do what I do​ and I run a very large business​ with a very large team.

​So when I am now forced into homeschooling, ​then it's different. I have to figure it out and I WILL figure it out.

There's a lot of things that are going on​ so if you can provide value to your team members about what's working for you in your life to continue to build your business, that's what's important right now.

​So even ​with homeschooling​ I did a team training about how to get their DMO (Daily Mode of Operation) done during the day​. ​Just spending an hour on their DMO inside their business and then the rest of the day focusing in on their children or whatever it is they're doing.

Create community inside your groups. This is important. I learned this one the hard way.

And then they would disappear...

They would leave my team and I would be like, Hmm... something is weird, right?

Because we have everything that you need to be successful here inside of what I do​, inside of my network marketing team but for some reason they were leaving.

​So I got on a zoom call with my mentor and I said, "You know, here's my issue... can you shed some light on this? Or can you help me?"

And this is what he said... and so this is super important if you haven't thought about this because you might be like me and just not thought about it.

I don't need a ton of "fufu", you know, "recognition," stuff like that to get me to do something​, that's not my personality.

I'm going to go do it because I want the end result​ which is stability in my bank account and to take care of my family.

Okay, now drop me a comment down below if that's you.

However, there are other people that require other ways of validation.

They require recognition in front of other people. They will do a lot for recognition and there are actually more people that are that way than are like me.

People learn differently and they also stay for different reasons.

So when I got on with my mentor, he said, "Brandy, you're enrolling these people and then they feel abandoned"

Because it's like, when they started out they were thinking "Oh my gosh, I love that. I want to be part of your team. I want to do all the things that you're doing."

You are on them when they want to enroll because that's what I focus on is new people always enrolling in the team continuing to build my business.

But once they're in, I just expected them to go to work!

So because I'm that passive person, I don't need all of that fancy "fufu," you know and the cheerleader type deal so I didn't know how to give that to those people.

If you didn't see the live that I did about the needers, the wanters and the deservers...go watch that. Go check it out because it's really important.

We tend to get... especially if you're like me (and I'm guessing a bunch of you are like me) we forget about that stuff. So have some fun! Have some fun inside of your team groups.

Some examples... do some fun posts... Like, you know, make fun of yourself. Haha... make fun of the situation.

Ask questions like,  "if you could do anything today besides sit at home in your house, what would you be doing?"

Or what's your favorite beach? Things like that gets engagement but people also understand so that you can start to build that family feel with that team.

And it's really important to get your leaders on board. If you don't have them on board doing this with you too... because it's hard to do it all by yourself, then you're it!

You're going to have to do it, right? I had to do it by myself at first. Now I have an incredible team that helps me.

Number Four - ​Talk About It, Openly!

Ask them questions about how they're dealing with the situation.

Now, of course you don't want to just wallow in the misery​ of everything that's going on​ but facilitate that conversation for them​. But also let them know that you care about them.

Show them that it's not just about them producing, not about them just doing volume in your business​ that you actually love them.

​This is probably the most important tip here. ​Put systems into place that duplicate quickly.

​The first thing that you want your team members to do when they get involved with you is to make money.

​So if they can get a customer or a distributor... And I don't know how that looks in your company because everybody's is different, right?

But get them in profit​, not profit, because you know they might've spent a significant amount of money to join your team​ but get them having money coming back to them.

So let me ask you... if in your first week or two, you got into a team and you had a check come that very next week, or even the week after... how would that make you feel?

Now some people take a little bit longer. You just have to love on them​ and that's okay.

​Like I said, go back and watch the live I did, the needers, the wanters and the deservers, because it will really help you understand who to spend your time with.

​What to do next​ to keep your team focused

How to actually take your business online without sending all the spammy messages or doing the "three" foot rule which is now the "six" foot rule, right?

You're going to want to grab the Blueprint.

It would be proof right, if they make money right away​, that they are in the right place and that their leaders knew what they were doing and that's the bottom line.

Once they have made money, they are probably 85% more likely to stay with your team and they'll stay for longer because you got them into action and you got them making money.

All right, so I hope that helps.

If you guys got value​ today, let me know in the comments below.

Feel free to share this with anyone you know that needs this.​ I would love for this to go far and wide because right now is so important in the network marketing industry.

The 3Ps You Need to Get Success In Your Home Business