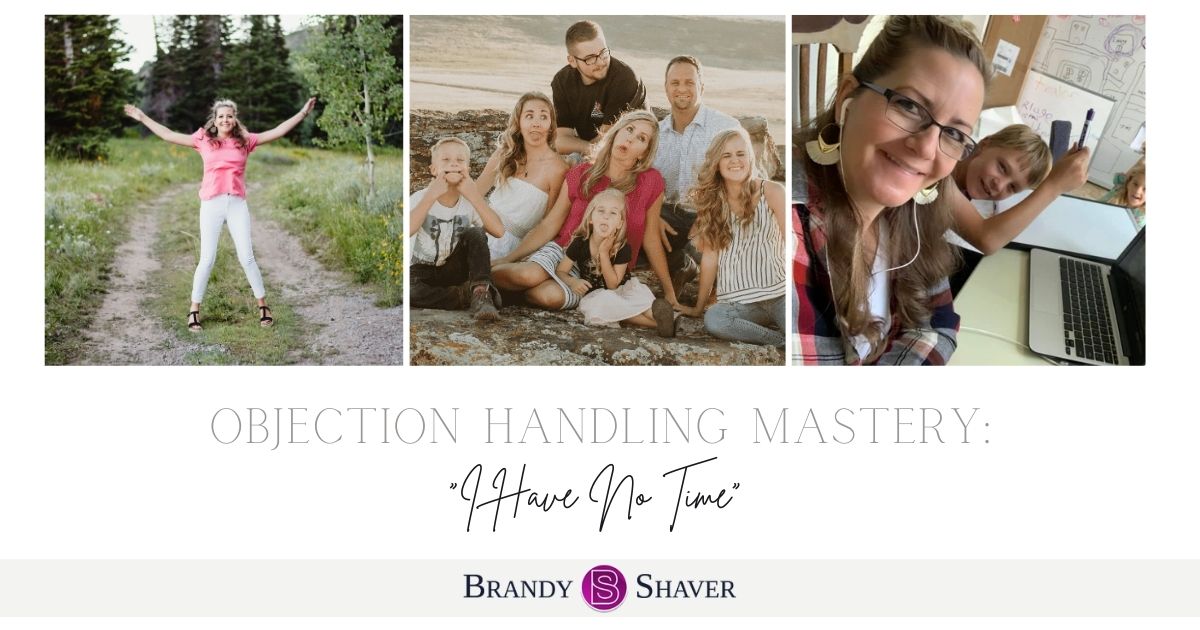 Hey, welcome to todays episode. Super excited that you are here. My name is Brandy Shaver, and we are talking about objections.

Well, here is what is really going on inside of your prospect's mind!

Maybe they're just not in a place where they want to take it on. It's too much for them. And I've been there!

How many of you have been there as well? Because I have been there where you're just like, you know what? I don't care how good it sounds right now. I'm drowning and there's no way I can take this on.

Now we say we don't have time because it's an easy way out. That's basically what it is isn't it? It's an excuse. So that could be the first problem.

The second problem is that it could be that you didn't provide enough value for that person to see value in what you're sharing with them.

Because listen, if I have somebody drive up in my driveway and they're going to drop off my Maserati and they say, "Hey, Brandy, you can have this Maserati for, you five grand." I would find the money!!

3. Not Ready To Change

The third reason you might be getting "I just don't have the time" is that they're really not in a place where they want to join or do anything different!

They just want to complain. So if they're complaining that they need another stream of income, they hate their job, all those things and then they don't jump, It's not their time.

It's just not interesting to them. They're just not ready to make a change. Does that make sense?

Let me know if that makes sense. Because when I figured this out, it changed everything for me, because I'm the type of person that I want the other person to understand, right?

Like, listen, I don't think you get it, right? Here is an opportunity for you to get out of what you're doing. And it would go in one ear and out the other.

And it boils down to where they are in their life. Or like I said, the other two that I shared with you earlier.

So let me know if you got value out of today's episode! "I don't have the time" is a total BS excuse!! But you don't want to be going and beating people up either!!

Don't be like "I know you have the time, everybody has the same 24 hours" right?

Don't get confrontational with them. Just say, "You know what, I get it. If it's not the right fit for you right now, no problem".

And then just go back to being friends. We don't need to be controversial to anyone at any point, based on what we're doing.

We want to attract more bees to our beautiful flower, which is our opportunity and our products.

So you're not going to attract bees by swinging around a bat, telling them exactly how you feel about it.

So I hope you got value out of today's episode. If you want more on how you can build your business online, using social media and building yourself a brand and a following, grab the link that's going to be inside this episode somewhere.

And I hope you have a great rest of your day and we'll see you on the next episode. Thanks. Brandy xx

How to Attract Your Perfect Prospects to You So That You Can Grow Your Volume in Your Biz to Rank Advance.

How to Dial in Your DMO