Are You Prospecting The Wrong Way On Social Media? 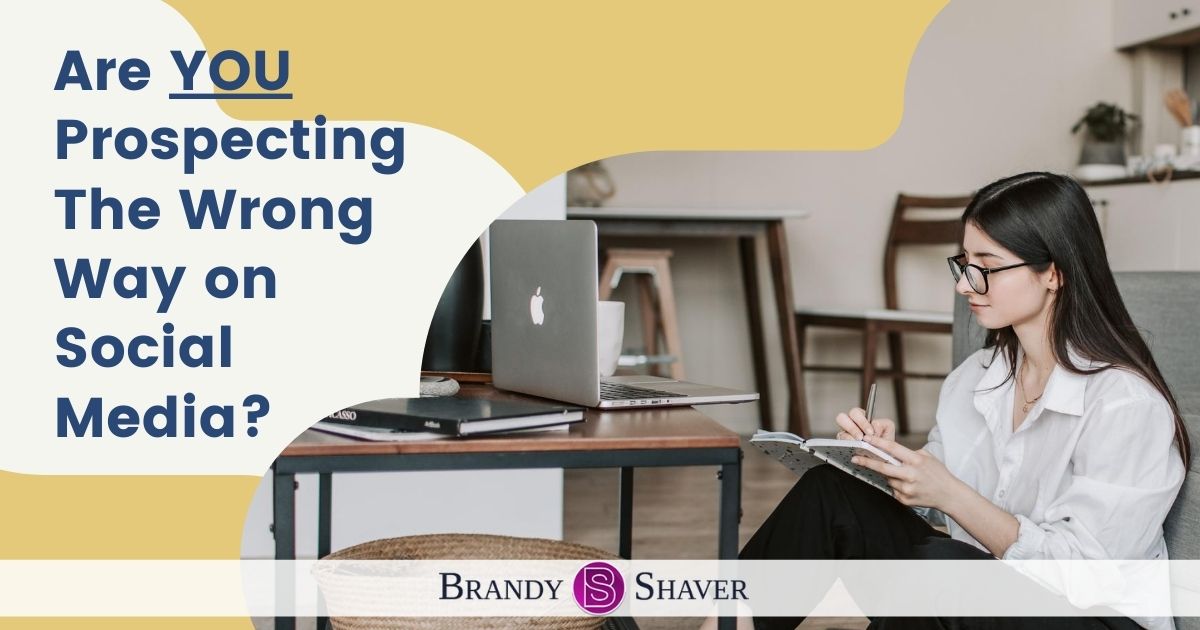 Are You Prospecting The Wrong Way On Social Media?

Hey, welcome to today's episode. I am excited to be here with you. If we are meeting for the first time, my name is Brandy Shaver, and we are talking about "Are you prospecting on social media the wrong way?"

And what I found since we have been dealing with everybody at home and everybody coming online to build their businesses is that there are a lot of people prospecting the wrong way or teaching things that are not working.

So I wanted to quickly pop in here and share with you some of the things that I have found over the four and a half years that I've been building my business online, that you can glean from and take in and use it to your business so that you're getting more results.

So, number one, let's talk about what we don't want to be doing.

So first off, if you're sending messages to strangers telling them about your ground floor opportunity, you are prospecting the WRONG way to build online. Okay?

So we call those 'Spammy Tammy' messages, anything that you copy and paste and send to someone, whether they're a stranger, whether you know them or whatever, it's definitely the wrong way to build online.

And I would ask you, because you probably have received one of these messages, if you haven't, I'm sure one of them is coming from someone on your social media, but how does it make you feel when you're looking at that?

It's kind of like, if you think about walking down the street and you run into your neighbor and right when you get close to your neighbor, you're going to say, BOOM "Hey, I want you to join my opportunity."

Doesn't really sit that well, right? So think about how you can modify your approach, if you're doing that, to being more of a friend. Now, here is the clue........

People are not going to enroll with you unless they know, like and trust you. That's just how it works, there isn't any way around it, alright? So that's the first way to not build online.

The second thing that I hope you are not doing, that if you are doing, to stop doing, is to post all about your products on your profiles.

All over your walls or your Instagram or whatever you're using, but stop posting about your products and about the amazing sale that you're maybe having because here's what's happening.

People are getting the name of your product, and guess what we're used to doing, we are used to going to Google.

So we're going to go to Google and we're going to type it right out. And I just did this over the weekend, there was something specific I was looking for and I went straight to brother Google, typed it out, found the best price where I could get it and who could ship it to my door the fastest. And I had it sent.

So what do you think people are doing when you are showing them your product name or how they get it without them talking to you?

They're going to brother Google and they're probably becoming someone else's customer.

Maybe they're finding someone else online, but just make sure that you're not giving away the goods.

The only way that they should be able to get your product is by talking to you through messenger, by calling you, whatever. But don't give away all of the milk because then they don't need the cow.

The third way is that you are posting (and don't take this personally, we've all done this stuff. So if you're doing this, don't take it personally.

I'm not trying to beat you with a stick or anything, I'm just trying to share with you what's not working and what you're going to learn. If you keep doing it down the road, it's not going to be very effective)

So the third thing people are doing and prospecting the wrong way that they shouldn't be doing is that they are posting about their company and the "Join Me Now". 'It's the end of the month, I need one more sign up to hit my goal'.

Do you think anybody cares about your goals? NO.

They only care about their goals, right? So when you do that, it makes you seem super selfish and it turns people off to what you're doing.

Now those are the three things I see are the most obnoxious ways people are trying to build their business online right now. But I'm going to give you my favorite way to grow your business online.

4. Do Attract Your Perfect People

And you can get more information about this, I'm going to give you a couple tips here in a second, but you're going to grab the link that's going to be in this video somewhere. Okay?

So that you can learn more on how to attract people to you.

So my favorite way that I learned how to build my business about four and a half years ago, that totally changed everything about the way I was doing it, is I learned how I could attract my perfect people to me, my perfect customers and my perfect team members.

And I just actually was looking at my board (I have a big whiteboard here) and in the last couple of weeks, I've actually enrolled eight new personal team members by them coming to me.

And that's really, really cool because that stops all the crazy, like you chasing other people and you become the hunted and here's how this works.

I'm going to share the exact secret you need to stop prospecting the wrong way. Of course, you're going to need more details to implement it. So you're going to want to grab the link in the video, but here it is.

For example, lets just go with steak and vegetarians. Okay. So if our perfect prospect is someone that eats meat, we don't want to be attracting people that are vegetarians.

We don't want to go into a vegetarian group and try to sell our meat. And that's what a lot of people are doing and vice versa, right?

Like maybe you're a vegetarian and you're trying to sell veggies to a meat eater. It's not going to work. So here's what you gotta do. You gotta grow an audience with the right target people, the right ones.

And again, you can get all the details on how to do that in the link inside this video.

You've got to give before you get, and you can give value. You can ask questions. You can comment, like and share on other people's posts.

But giving, engaging with those people, those perfect prospects is how they're going to get to know they can trust you.

And then the last one is promoting. Now, when you promote, after you've done the first two of these, it seems like you're just inviting or sharing with them something that's working for you.

And when you ask, then you are going to get love in return!

So I hope this helps clear up a lot of things for a lot of people about prospecting the wrong way, because I've been seeing this all week, I was on vacation and my stepdaughter was here so I had a lot of time to just kind of scroll and not be in like go mode.

And so follow that simple secret, my favorite way to build. And you can get more information on that inside of the link below.

So have a great rest of your day and we will see you on the next episode.

Have a great one, Brandy x

The 5 Benefits Of Branding Yourself Instead of Your Company

Have a Lazy Team? Here’s the Quickest Way To Solve IT!