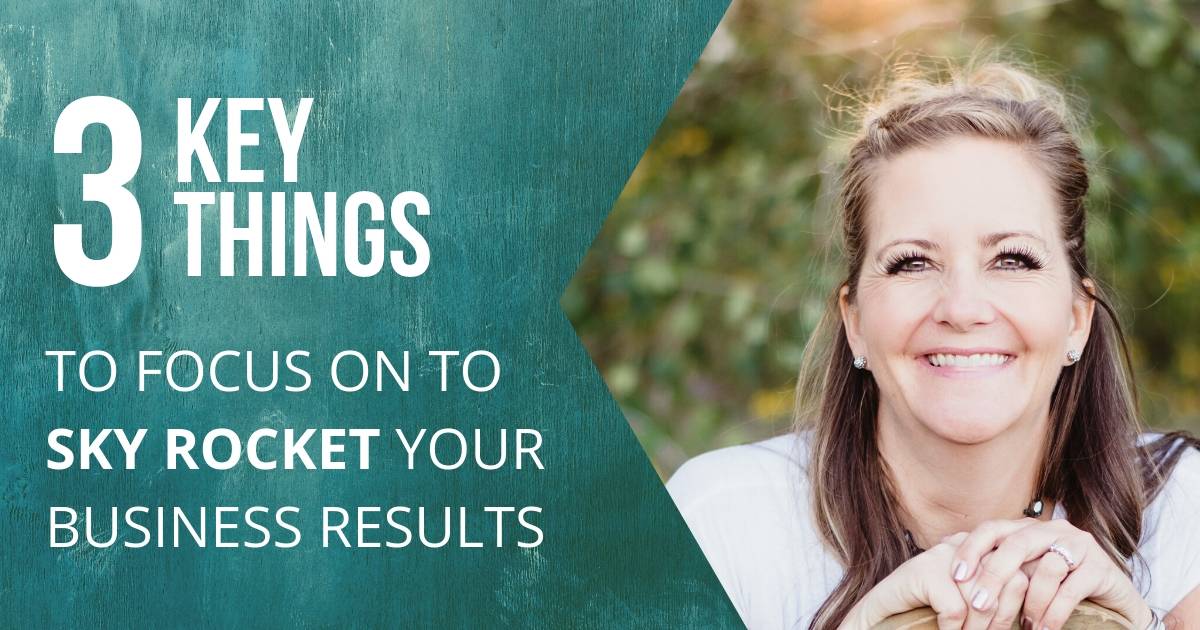 ​​Today​ we are talking about the three key things to focus on to skyrocket your business results.

Now, let’s​ evaluate the past year. ​Have you ever felt like, “Oh my gosh,​ I’m not exactly where I wanted to be in my business”?

How many of you are in that boat? Let me know in the comments below because I’ll tell you one thing, your business never grows faster than you would like it to.​ So if that’s you, this is going to be super helpful for you today because there are maybe some things that are happening inside of your business that is actually causing negative effects instead of creating the business results you need!

I’m totally guilty of it and when I did an evaluation this last couple of weeks and went over numbers and things like that for tax season, I identified a few things that I was doing in my own business to sabotage my results.

​Playing the ‘Long Game’ to Get Business Results…aka Consistency

And so when we get doing these things inside of our business, sometimes we just don’t do them long enough. And so the key here is going to be consistency. But I’m going to break this down for the three key things that you can focus on to skyrocket your business results.

So I wanted to share it with you so that you were clear on what you might want to be focusing on in the next year, or even right now. Don’t wait till the next year. Start now to build your business results.

So if you’ve ever struggled with “what do I do?”, “What do I say?” or “What tactic do I use?” Let me know about it in the comments below. There’s a lot of tactics that are going to fit into this strategy and tactics.

​What is a Tactic? Tactics are for instance:

A tactic is something that will change. Because for those of you that have been around a while, you’ll remember when people used to build their business using Google and they still do, right? They still do.

But then Facebook came along and so you’ve got now Snapchat and you’ve got all these other social media platforms as well. And so the tactics are things that are going to change and what you can expect, as being an entrepreneur or business builder, is that things are always going to change when it comes to getting the best business results. They’re never going to stay the same.

So just getting used to change is definitely important. But the thing that I want to stress here is that you understand the difference between a tactic and a strategy.

So, What is a Strategy?

​Because a strategy is something that is proven, it’s set in stone. It’s repeatable, it’s duplicable. The strategy that we actually use to build our businesses and become successful entrepreneurs is a strategy that’s gone clear, clear back, clear, clear, back before they had the internet. It’s even a strategy that was used in print, in newspapers.

Like they would just say, “Hey, this is the price, this is where you get it”. Well, there was a genius person that decided that they were going to add in some information or some education into the Farmer’s Almanac. This is where it became a strategy because they started to do this, instead of just slamming you.

Most of you probably have gotten the newspaper or the ads for Black Friday. We’ve been getting stuff on the TV, on your phone, on your ads, inside your Netflix, on your Disney Plus and all sorts of other places. You’re getting all kinds of ads and things about Black Friday.

Now what the Farmers Almanac did instead is they started to add in education and things that were actually helpful to farmers and farmer’s wives.

That’s how they started to build the “know, like and trust” with their clients and today the Farmer’s Almanac is still being used. My 89-year-old grandfather still gets the Farmer’s Almanac because he is a Rancher and there’s a lot of information in there that is helpful to him.

Okay, so now take that. Now that you know that piece of the puzzle (it’s a strategy that’s older than dirt almost) we’re going to put that strategy into our business and so I’m going to show you or help you understand what that is.

Ask yourself these questions:

This way you can develop content or things for them that are going to attract them to you. Now what I mean by that is you develop content specifically for their needs. So maybe you write a blog post, maybe you are doing a Facebook Live, maybe it’s just a post on your personal page, right? But it’s got to have the information in it that maybe somebody that is looking to build their business or somebody that is looking to buy your certain product is looking for.

​Some of them have been here for a long time, right? But if you’re in a health and wellness company and you’ve got a prebiotic and a probiotic, maybe we need to educate people on why they need either or why they need both. You’ve got to put out content or give out value for people. This could be maybe you’re building a team, maybe you are doing health and wellness, maybe you’re just wanting to sell some products. It doesn’t really matter as long as you understand your audience and you aim to grow that audience.

So for instance, I’m pretty much known for the person that’s going to tell you like it is. If you’re in this space, in building a business, building a team, it’s not going to happen overnight, right? It’s just not and I’m not going to tell people that it is. In fact, it’s going to be a five to seven-year build-out for you to develop a decent enough income to walk away from, a good-paying job.

​So just to be honest, that’s kind of how it is. You want to build a rapport with this audience and so you’re going to want to be interested in them. Some things you can do, for instance, to become interested in them are number one, ask them questions.

There’s a lot of different people that become entrepreneurs or that start a side gig because of different reasons. Some for extra money, some for extra time, some are just bored and some want to be part of something bigger.

​You know there are lots and lots of different answers, but me engaging with that audience is authentic and it’s definitely something that has to be done in this strategy to build “know, like, and trust” with people.

Key Step 3: Influence that Audience to Suit Your Objectives

​That’s where you will have the most influence over people because you are providing things that solve their problems.

Your Strategy for Success

It’s really, really cool. But it’s the strategy that I want you to focus on. So then they engage with that audience by providing all of that value and then they influence the audience. So if somebody is reading the Farmer’s Almanac all of the time and they all of a sudden have this amazing tractor that drives itself, which is a thing, by the way, am amazing tractor that drives itself on GPS, you can run from your phone and it does all the work for you.

That is going to influence the rancher’s decision to buy something. So when you take that exact example and you put it into how can we build our businesses and use this online, it totally makes sense.