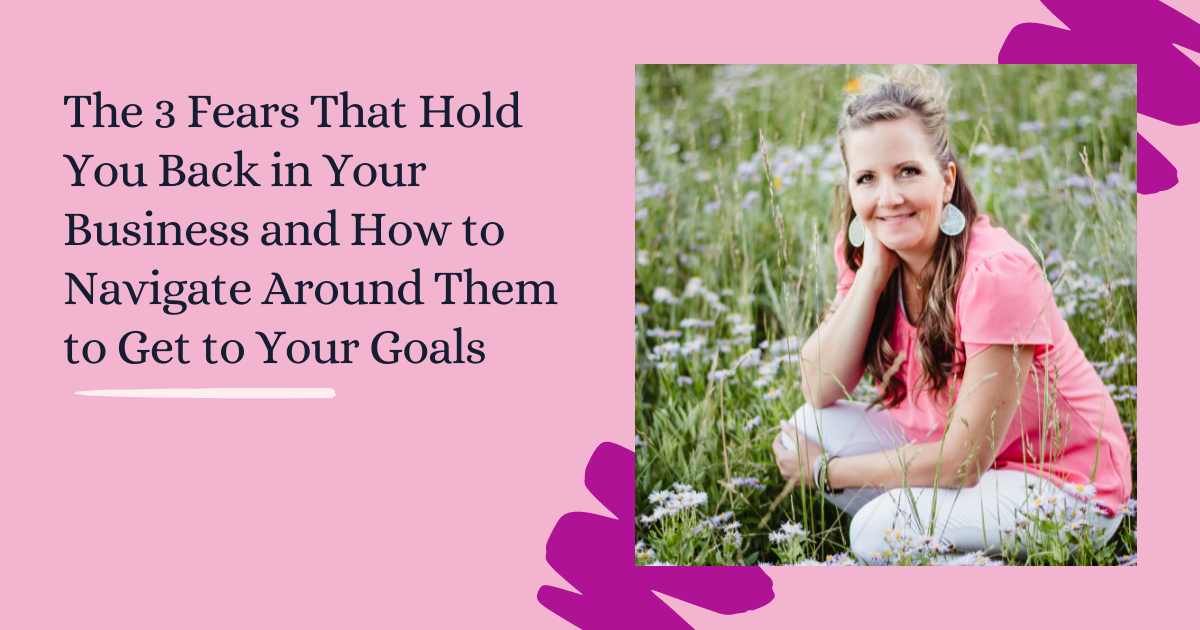 Hey there. We're talking about the three fears that hold you back in your business and how to navigate around them to get to your goals quicker.

My name is Brandy shaver and I am so excited about today's episode because fear is what holds a ton of people back from getting where they want to go. And I am actually one of them.

Fear is an emotion that's not subject to reason, but fear is subject to action. You can't talk yourself out of fear. Fear is a real emotion that your body has made to keep you safe. So anything that feels new and different is going to bring up those fear sensors in your brain and your body wants to run or wants to fight. And that's just how we were designed.

The best way that I know how to share this with you is if you've seen the movie, the cruise if you haven't seen it, it's a great movie. My kids love it. Even my older kids love it. I love it. It's a great movie. And in the first of the movie, the teenage daughter starts to get curious about different things and they are cavemen. The dad is very protective because everything is dangerous, right? If they are outside, they're in danger. So he likes to keep them all in a cave where they're safe. Every time she talks about something new or tells a story about something new or talks about whatever is new or does something that's new, he shuts her down and tells her that it's not safe. And so you'll have to go check that out.

There are three different fears that I want to talk about today.

Fear of change, this one is a big one. Because of what we do as entrepreneurs, if you're building your business online, offline, whatever you're doing, entrepreneurship is different. It's different than what everyone else normally is doing. Right? Normally everybody has a job and it's normal to work five days a week, and it's normal to have a boss and all those things.

Being an entrepreneur is a chance to be different, but in the different, it means that you're, you have a fear of change, right? There's an exact example I can give you of this. My husband and I are at a place where he can actually quit his job. He's been able to quit for quite a while and we go back and forth on whether he wants to, whether it makes sense to stay there. He's got a really great job. He makes really good money and we are not underground anymore. Like we were when he first started there. He has a leadership position, and he's respected there. He has worked there for a long time and he likes to stay busy. And so the thought of, we were actually just talking about this yesterday and the thought of him quitting, his fear of change for me and fear of change for him.

Fear of ridicule. This is one that a lot of us deal with, especially when we first get started inside of building our own business or doing something different, because think about the crabs in the bucket, right? If you've ever heard that story where you put crabs in a bucket, and one of the crabs will try to climb out, right. And the other crabs will pull them down.

The reason people ridicule or say things is that it's different. Again, going back to the cruise, right? It's new and different. And they think it's dangerous. They're trying to protect you. This is what motivated me,  well, I can just tell you the story. My uncle was over for a barbecue. And I had just started my business. I wasn't doing very well. Right. It was going through my friends and family and I was getting a lot of ridicule. I was getting a lot of ridicule, they would say, you have a successful business, you make really great money. You guys do really well. Why do you need to do something different? Why are you doing this?

Why are you putting your family through this? Why are you using up time that you could be spending with your family? Why, why, why, why, why? Right. And there was a lot of ridicule and my uncle at one of these barbecues, it was after a couple of weeks after I had talked to him about doing network marketing with me and he of course had ridiculed me. Then there he was at this barbecue and here I was my business wasn't doing very well.  I was feeling kind of down. I was feeling like is this ever going to work for me? And if you felt that way, let me know.

But I was just going along, I wasn't talking about my business to anybody at the barbecue, and my uncle out of nowhere, He just says, Brandy, that little business that you're doing going, are you still trying to sell the magic pills or whatever. And I felt this high.

So if you've ever felt ridicule in your business or anything else for that matter, right? Like it's embarrassing and you have to learn how to use it as fuel. And that's what I did. So every time I get paid, I think of my uncle. But that's the kind of thing you're going to hear from some of the people that love you or supposedly love you. You may get your feelings hurt and you've got to build that belief in yourself. And you've got to build a belief in the industry.

So fear of ridicule is one of the ones that stop people.

Fear of failure. Now,  I remember when I got started in network marketing when I was after I'd gone through my friends and family and doing all those things, I was driving like two and a half hours, one way to prospect in malls, restaurants, all the things. Cause we don't have that where I live, I live in a really small town with fewer than 10,000 people. And everyone here knows everyone. Right? So I would go and I would prospect people.

This one is hard for me to tell you because it still kinda hurts. And I would leave my kids with a nanny or a family member. And I remember hurting and the pain of saying no to my kids and missing time with them missing time with my husband missing all that stuff. I had to. There's a saying where you have to sacrifice something to get something else, right. And you don't necessarily have to sacrifice all your time. But I was used to being that stay-at-home mom, I was used to being always available for my kids and my husband. And so fear of failure is something that a lot of us have, and it still even sneaks up now. Even though, I make seven figures a year in my business. I think sometimes, what if this all goes away? We all have those feelings.

And so fear of failure is something that you're going to have to work through. So success is nothing more than a series of corrected failures. And this was something that really stood out to me because to not try is you choosing to fail, right? And you've got to know that stuff is going to happen, but as long as you never give up, there are only two ways you can fail, not trying and giving up. That's the only way you can fail because, if you keep going, keep learning the skill sets and doing the things you will get to where you, where you want to go.

Desire and study and consistency and action equals success. And that's the part that I want to share with you is that failure, fears of failure feels of fears of ridicule, fears of change can all be stamped down and go away by just taking action.

One of the things I taught a team member yesterday because she looked at me and said, I just don’t know what to do. I know where I want to go. I have exactly what I need. I just don't know the reason I'm not doing it. And I said I know the reason you're not doing it. It's because you think it needs to be perfect. And I used to be that same way.

If that's you, everything has to be perfect before I move forward or do something then you're never going to go anywhere because it's never going to be perfect. So I taught her something that one of my mentors taught me a long time ago. And she said, perfect is the enemy of done. So done is better than perfect. And that's what I just live my life by every day.

That's what I do in my business done is better than perfect. And I can change it at any time. Right. I could go redo the video. I can rewrite the sales page. I can redo, the conversations I can learn and grow. And that's what this is about.

I hope you got value out of this.

See you next time.  Bye-bye.

Finally, Discover How To Attract The Right People Into Your Downline By Swiping the Simple
3 Step Recruiting Formula

Claim Your FREE Social Media Recruiting Formula by Clicking Below...

Five Tips on How to Build Content That Gets Results

Two Ways To Find People To Build Your Business With

TOP Facebook Tips To Help You Get Results In Your Business

Yes, I Want My Free Blueprint!

Enter your best email address below and click the
"Get Instant Access" button to get your blueprint now...